Notes for each of the lectures as well as notes from each of the weekly tutorials.
Topics Include:
-Asian Views of the World in the 13th and 14th Centuries
-Cannibals and Converts: North America through European Eyes
-Climate, Disease and Populations: 14th Century Europe
-Conversion stories; from the Franciscans to the Jesuits in Japan
-Cultural Migrations: Korea and Japan in the Great East Asian War
-European Social Hierarchies
-Faith in Florida: The Timucua, Calusa, Spanish and French
-Islam, Africa and the Indian Ocean in the 13th and 14th Centuries
-Mapping European Imaginations
-The Ottoman Empire
-Peasant Societies, Asian Varieties: Ming China
-Portuguese Pirate Traders in the Indian Ocean
-Power and Culture in Heian Japan
-Slavery and the Slave Trade
-Europe, the Americas and the Columbian Exchange
-The Eruption of Laki and European Revolution
-The European takeover of the slave trade: Africans in the New World
-The Globe at the end of the 18th Century: Africa and Asia
-The Mughals and peasant society in India, 16th-17th Century
-The Vikings
-The VOC in the Indian Ocean; Slavery in Indonesia
-Trade, rights and war: representative government in Europe
-The Rise of the Merchant Class
-England and Scotland: The path to civil war
-Tutorial reading notes for weeks 3,4,5,6,8,9,10,11,12

Please note these are not in lecture order. 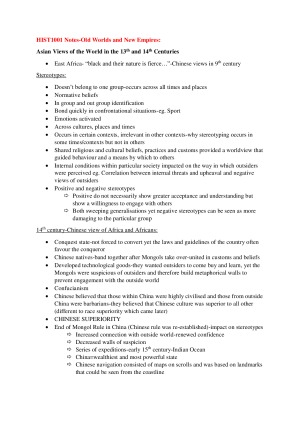