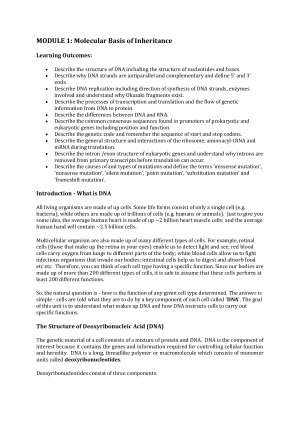 Notes for the entire semester of ASC221.

Topics include:
-The basic mechanisms of inheritance including the structure, role and behaviour of chromosomes and genes
-Mendelian inheritance and the factors that effect the segregation of genes
-The common phenotypes that are determined or influenced by one or a few genes, including coat colour and disorders with a genetic basis
-Molecular genetics, how DNA forms genes, how proteins are formed from DNA, and how modern molecular genetic techniques can be applied in animal breeding
-The behaviour of genes in populations of animals and the common mathematical models used to predict genetic events in animal populations
-Quantitative genetics and its application in animal breeding programs, from single herd or flock level up to national and international programs
-The factors which affect the success of breeding programs
-The application of advanced breeding technologies like AI, MOET, sexed semen and others to breeding programs and the implications of these for genetic improvement of animals
-The basis and application of cross-breeding programs
-The genetic evaluation programs commonly used in Australasia for dairy cattle, beef cattle, wool sheep, meat sheep, pigs and poultry (egg and meat)
-The industry structures which affect the way that genetic evaluation programs work in each species, and how genetic theories are best applied
-The issues currently facing breeders of the common domesticated species of animals in Australasia

Learning outcomes include:
-be able to apply inheritance concepts to explain the occurrence of common problems or opportunities for genetic improvement in animals and animal production, including genes which contribute to increased susceptibility to disease, increased resistance to disease, resilience to disease, or cause disease directly
-be able to apply genetics principles to the selection for anthelmintic, insecticide or antibiotic resistance in invertebrates and micro-organisms that cause diseases in animals
-be able to devise a practical breeding program for breeders of farm animals, performance animals, working animals and companion animals
-be able to distinguish between the important genetic decisions to be made by seedstock producers and commercial producers of livestock
-be able to use mathematical expressions which are common in quantitative genetics to predict the outcomes of particular approaches to genetic improvement
-be able to devise and use simple mathematical models, using computer software like spreadsheets or other programs, to develop, analyse and experiment with genetic decisions
-be able to apply genetics principles to the breeding of unfamiliar animal species or populations
-be able to provide informed advice to lay persons and scientists about the merits of particular genetic decisions or genetic selection programs