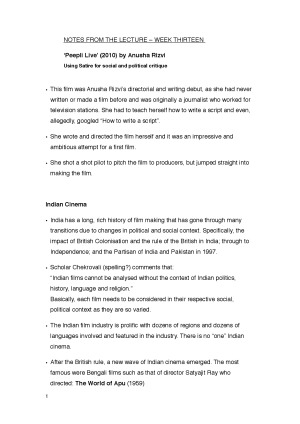 Notes taken for Week 13 of the course in 2015, where a viewing of 'Peepli Live' was included in the subject. Attached the cheapest price as I understand the course structure has since been changed (though I think this film remains relevant to course requirements?)

These notes also be useful for anyone looking for themes/texts/discussions relevant to the themes presented in the film, or in general analysing Indian/British Colonialism-centred Film Making; comedy in Indian film; and the female gaze in Indian Film.